My book is called Spelling B And the Missing Magic by Lexi Connor. The main characters are a girl named B her best friend George and their substute  teacher mr bishop. B’s main problem is that her whole family has a magic powers and she does not. When B’s class has a spelling bee and the prize are behind the scenes tickets to a concert with a band called the black cats weird things keep happening after B spells a word. then the prize tickets go missing and everyone starts to worry and B needs to find them.

I think without that small little scene where mr bishop says we are having a spelling B is a big but small event because without the spelling b the rest of the more fun events wouldent happen in this book B does make a big desision but I am not going to say because it will spoil the book. At the end B‘s problem gets resolved! “I have to miss spell it, their is no other way. Bye-bye tickets.”

I loved my book it was fun, funny and magical. A reader who likes a book about mgic and fantasy and realistic ficton tied together in one  would like this book becaure the is B and B’s family who are magical and the rest of it is normal town normal school and a little bit of freindship. I would rate this book 4 & ½ stars! 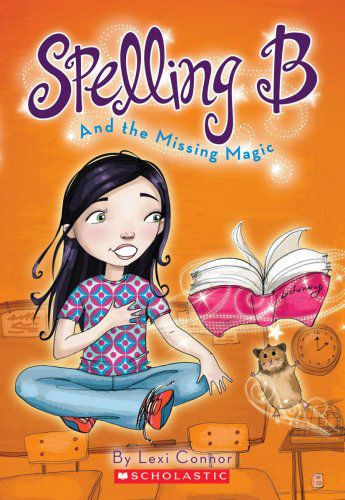 I read a book called Mandy, by Julie Andrews Edwards. I started to read it when I saw that a very famous actor was a writer. The book was about an orphan named Mandy. She would love to have a place to call her own. There is a big wall that is the border of the orphanage. One day Mandy finds a way to climb over the wall. When she gets over the wall she finds an old cottage in the woods. Everyday after school mandy climbs over the wall and does her best to make the cottage her own. She saves up her money to get things to use in her cottage and even lies to get the things for her cottage.

My book was called Kicks Saving The Team, by Alex Morgan. This was the third

book in the series. The main characters names are Devin is one of the team captains. Zoe is one of Devin’s best friends in the book she has her baht mitzvah on the same day as the championship game, Emma another one of Devin’s best friends Emma is very clumsy, Jessi Devins best, best friend, And Frida, the actor another one of Devin’s friends. Devin is a very sporty and sensitive character. One scenario when she is sporty is when She makes the winning goal at a playoff game. That means she practises a lot! A sanrio when she is sensitive is when the school newspaper prints her quote wrong and half the team goes against her she has really hard feelings about that. Devin lives in Kentville California in the present.

In the book the school newspaper prints Devin’s quote wrong and half the team goes against Devin. They can not work together as a team. Two important events are when they have the championship game and when Coach Flores leaves and they are stuck with Coach Valentine. An important quote is “I Don’t know where I would be without my team” It’s important because the newspaper said it as “I don’t know where my team would be without me.” It also shows how much she cares. It also broke up the team which is a very important part of the book.

I enjoyed the book it was funny not to descriptive and has different paces depending on the time. I would recommend the book to girls who like books about friendship and sports. I would rate the book 9,0000000000000000000 out of 5 stars.

(Don’t read the book if you have not read the first two.)

I really enjoyed Diary Of A Wimpy Kid, Cabin Fever, by Jeff Kinney. The main characters name is Greg Heffly. He lives in the present in a decent sized town with a lot of towns next to it. One thing that happens to Greg in the book is he sometimes accidentally/on purpose gets in trouble. But he talks his best friend Rowley Jefferson into it with him. A part in the book that explains that is when Greg and Rowley want to make a holiday bazaar and they put posters in front of the school when the principle already told them not to. They put up their posters and it starts to rain. Someone sees them but they do not know who. The next day the story is in the papers. After they call a bunch of people get called to the principal’s office Rowley confesses. Greg gets in trouble and is very unlucky.

While Greg stil thinks he is being looked for by the police “The search” for Greg gets delayed by a big snowstorm. Gregs dad is staying a resort while Greg is being touter by hunger and brothers. Then Greg’s little brother breaks his moms glasses and Greg has to look after Manny because the mom can not see. Two important events are when he finds out you can get frozen Drummies (his favorite chicken he gets at the Holiday Bazaar). That is an important part because without the frozen Drummies he never would have started his Holiday Bazaar which got him in trouble which is the big problem of the story. Another important part of the story is when Manny breaks mom’s glasses. That is important part because if Manny never broke mom’s glasses Greg would not need to take care of him for around a ¼ of the book. Greg is very sensitive self involved and loves privacy he loves to say “So I’ve started wearing sweatpants to bed because I really don’t need Santa seeing me in my underwear.” The book takes place around christmas and he wants lots of privacy from santa.

I enjoyed this book because even if you read it four or five times there is always suspense like: Will Greg go to jail? Did Principle Roy find out he did it?  Will Greg get in trouble for what he did? So much suspense! I would rate the book 1000000 out of 5 stars. It has everything a good book need’s like comedy and it never gets boring With no typos! Much much more! It’s GREAT! I REALLY recommend the book!

The Kicks Saving The T

eam by Alex Morgan, is about A girl named Devin who just moved from Pennsylvania and is really good at soccer and is worried about not making the soccer team. But then she meets Jessi who tells her the coach is very inclusive so everyone makes the team but she also hears the team is very bad! Then she becomes a co captain but the other co captain is the meanie and they lose a lot of games! Will devin save the team?

Devin is a really good student. At a point during the season Jessi is falling behind and she is not aloud to play on the team. But devin tutors her and she gets back on the team. But then they have their rivalry game and mirebel does something that makes things worse so with some new friends devin just might make a good start in a totally new place. Emma whose clumsy and zoe with stage fright and frida the actor devin might turn the team around!

two important parts about the book is when Devin Find solutions for all the players that is important because it helps their team win! And when devin gets voted team captain on her first day of school in a whole new state across the country from where she is from. That is important because  if she become team captin she would not have been able to help the team how she helped. something she said on the first day was: f Yeah, x is in how many friends i’ve made so far. X = none.”

I enjoyed the book because it had a lot of sports, and friendship problems I also liked how she stood up for herself but still really flexible and strong! I would recommend this book to people like freindship and sorts related and moveing schools and makeing things better by acomplishing things. I would rate this book five out of five stars!

Tale Of A Fourth Grade Nothing

Tale Of A Fourth Grade Nothing was a good book. It had a

great story about a boy named Peter who has a brother named Fudge. Peter has a pet turtle that he really cares about and love named Dribble. Well fudge always gets in the way by causing trouble. So a bunch of funny things happen & Fudge always ruins them. Like when the dads client comes over he takes out Peters turtle when he knows he not supposed to & the client hates the turtle and the client leavs the next day. At the end something happens that has to do with Fudge and Dribble & really efects Peter and his feelings. I am not going to tell you, You have to read the book to find out! I would rate the book 5 out of 5 stars!

I loved it I hope you will love it to!

My book was Mary Poppins. It was about a family

named the banks who have a nanny named Mary Poppins. Mary Poppins And the children Michael, Jane, John and Barbara. Meet a angel from the sky, many talking animals and use a compass that helps you travel around the world and more. I would rate the book 4 and a half stars out of five stars because in my opinion sometimes there was a little too much description I like to get to the story because it is so interesting. I would reccomend this book to some one who does not like alot of comedy but a lot of adventure and magic. I loved it I hope you will like it to!

My book is called The Doll Shop Downstairs. It was a very good book. I would recommend the book to people who like not a lot of adventure but a big problem with many obstacles. I would rate this book 4 stars out of 5. One of my favorite parts is is when they go to FAO schwarz. The book is about a girl named Anna whose family owns a doll shop. The doll shop has been in the family for many generations. The Anna needs to help the shop. Do you want to Know why? Well to bad! You just have to read the book to find out!

I would say the book Frankly Frannie Principal For The Day by AJ Stern was a very breathtaking book. It was like, what is going to happen next? Is she going to be principal !? I would recommend the book to people who don’t like as much adventure but a funny book with made up words and a very curious main character. I would rate the book 4 stars. My favorite part of the book is when she is putting her principal composition in her folder. My other favorite part which happens throughout the whole book is when she makes up words!