Crogan has a big problem. A pirate who Hates Crogan is the captain of Crogans ship and is  trying to kill Crogan. The setting of this book is Tortuga, another island, and Crogan’s ships. Actually, this book is really set in a random suburb because the author uses a framing device. A framing device is where you have two stories, usually someone is telling the story or thinking of it and the “framed” piece is the main part but the non-framed part is what’s really happening. Crogan is very acrobatic. There’s a reason he’s called “Catfoot” Crogan. He can swing from the crow’s nest on a rope in a semi circle and land next to the captain.

Crogans old captain had a set of rules that keeps the pirates alive. For example one rule is not to plunder French ships because the pirates are helped by the French. A big event is when D’or (the new captain) decides to plunder a French ship so Crogan gets in trouble because too many people knew that Crogan was with D’or in a French island. That is also a problem because it means that D’or will give Crogan a bad reputation. Another important event is when the old captain give Tom Dander the small ship not D’or, his first mate because this makes D’or really mad. Theres a good quote from the old captain that helps prove my point. “In truth,I was surprised he didn’t throw thunder when I named Tom Dander captain ‘stead of him.”

This book is called Scorch Trials by James Dashner. The characters are the Thomas and the Gladers. (Well actually Thomas is a glader) The Gladers are the kids that got dumped in the Glade with their no memory. In this book it turns out that the Maze is part one in a series of tests a weird organization called WICKED. The Glade is inside giant maze that opens in the morning and closes at night. Thomas mostly worries about his own problems because after they get these tattoos that tells them their place in the group all Thomas thinks about is how his tattoo says “to be killed by group B.” The setting of this book is in future America where there are sun flares that give people diseases that turn people into cranks and when you’re a full blown crank you go crazy.

Thomas’s main problem is that he has a disease called the flare and needs to go 100 miles north to get to a safe haven where there’s a cure. An important event is when a hurricane strikes and kills lots of gladers. Another big event is when Thomas gets kidnapped by group B and Teresea is in charge of the group. Teresea is the only girl glader who Thomas can talk to in his mind if she also wants to. That is important because that means Teresea betrayed him. Also, a big event is when Thomas sees Teresea and kisses her. I think that Teresea betrayed him because of this quote: “The betrayal meant he couldn’t trust her anymore, and his heart told him he couldn’t forgive her.”

The main characters in Legend are June and Day. Day is very loyal to his family members because he risked stealing from a heavily guarded hospital with only two knives to get the medications his brother needs. June is very smart because she got 1500 on her trial. In the Republic Of America you get a trial when you’re ten. You score anywhere from 0-1500 on your trial. Depending on what you get on your trial you either die, get to go to a high school and a college, or go to a high school and get a choice of the top four colleges. The trial determines whether your smart or dumb. June is the only person to get a 1500. June wants to hunt Day down because she thinks he killed her brother, Metias This book is set in the Republic Of America which is at war with the Colonies Of America.

Day’s main problem is that he’s a most wanted criminal but he needs to make a ton of money to get his brother the cure to the plague he got. Junes main problem is that her brother just died and she left college to join the military. June is fifteen. An important event is when Day steals from a hospital and people think he killed June’s brother so June hunts him down. Another important event is when June goes on a website that her brother made and the website tells her the truth about the capitol. The website tells her a everything that’s bad about the capitol. Day knew all  of it way before her. Legend is all about rebels because the main characters are rebels against the Capitol.“If you want to rebel, rebel from inside the system. That’s much more powerful than rebelling outside the system.” – Metias before he died. I think this means that if you rebel outside of the government they can just shut you out, but if you rebel from inside it’s harder to shut you out because you might have supporters that are in the military or someone that is powerful.

I definitely liked Legend. It had a lot of action (which I like) and it really kept me on my toes, like I couldn’t wait for the next part. I also liked it because it is very interesting to see from two totally different points of view. I would recommend this book to people who like dystopias and action because it is a dystopia with lots of action. I would also recommend this to people who like knowing a story from both sides because June doesn’t know about all the bad things and only knows about the military and lives in a rich sector. Day on the other hand knows all about the bad stuff the capitol does and lives in a slum sector.

I would give this five stars because it kept me on my toes and had lots of interesting twists in the plot.

This book is called Secrets of Shakespeare’s grave by Deren R Hicks. The main characters are Julian and Colophon. The Secrets Of Shakespeare’s Grave is about a girl named Colophon. Her dad owns a big business called Leterford and Sons. One day everything goes wrong with the company (buildings burn). One day in her house in manchester she overhears a conversation that would be a spoiler. On thanksgiving her cousin Julian shows her a painting that supposedly leads to the family treasure.  One day Colophon figures out the clue and it leads to shakespeare’s grave. The setting is manchester, New York City, London, and Stratford Avron. My favorite part is when Mull and Case are being chased by dogs. 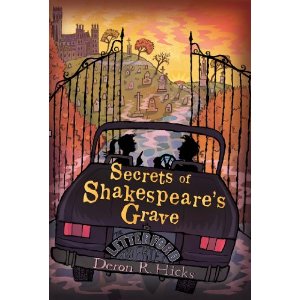 Atlantis Rising is about a person named Promi. He is a thief with a sweet tooth in the city of great powers. One day he steals a pie and gets thrown in a dungeon, where he meets a monk who tells him that the immortals are at war with the immortal of war. After Promi gets out of the dungeon he meets Atlanta, who has natural magic. The Immortal of war has a servant named grukkar who is in the mortal world. Grukkar is trying to find a magical object and turn it into a weapon for Narkhazan (the immortal of war.) Also, in the dungeon Promi meets a listener (magical people) who gives him listener powers. He also learns of a prophecy that states that someone with the mark of a soaring bird will hold the balance of the two worlds. Promi has that mark. My favorite part was when Kermi (a magic creature given to Promi by the listener) jumped on Narkhazans face. I would rate this book five stars because it is very interesting.

Fablehaven is about a brother and sister (Seth and Kendra) that find a magic world. In the magic world there is a demon prison and the keys are artifacts that have magic powers. The enemy is the Society of the Evening Star and they are trying to open the demon prison. The artifacts/keys are hidden on places that hold magic animals called preserves. Seth and Kendra look for the artifacts to stop the Society of the Evening star from getting them. There are many preserves but five are secret and have artifacts in them. I would recommend this book to people that like fantasy and adventure. My favorite part would be a spoiler so I won’t say it. I rate this book 4 stars because it wasn’t funny enough. 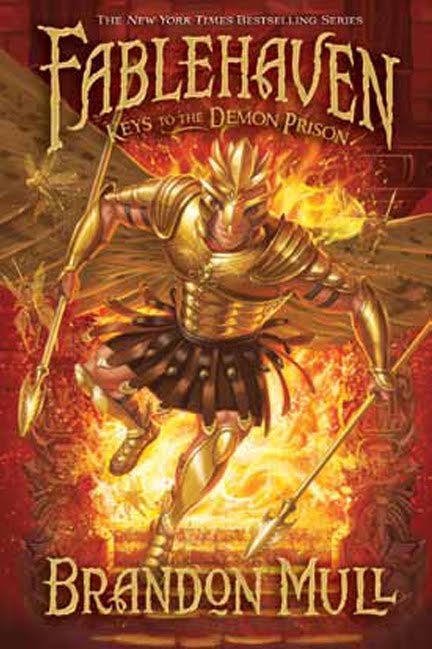 I thought it was weird because they meet a talking frog that can become a dragon and that it was sort of unrealistic because they go on a train alone to random strangers.

My least favorite part of the book was when they just came into the house because nothing happens at that part.

All in all I would recommend this book to people that like fantasy time travel.

Allegiant is about a girl named Tris who used to live in a city that was divided into factions. This book is about her and her boyfriend, Four after they leave the city to see the outside world because the first tyrant, Jeanine gets overthrown. But the  power just changes to the next tyrant, Evelyn  who got rid of the factions. Evelyn tries to kill Tris and the Allegiant, a group of people who want factions back.

At one point everyone in the city is about to die because the Allegiant are trying to kill Evelyn and the people that are with Evelyn. Evelyn has death serum and if she releases it everyone will die, so the bureau will try to  reset the city. Tris and Four try to figure out how to stop everyone from dying without resetting them.I would recommend this book to people who like dystopian action books. I rate this book 5 out of five even though it is a little intense.